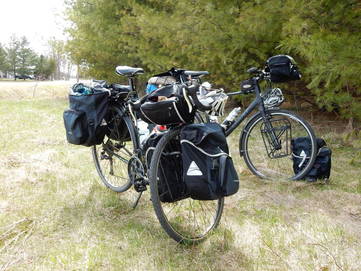 ​              I can't quite recall the exact day this all came about but the idea of taking a year off to travel popped up somewhat casually back when we were still working our butts off at the Coffee Peddler, our very own café in downtown Galt. "Sounds like fun" I probably said. "We should bring our bikes" got into the conversation. My every effort, every thought went into making the Coffee Peddler a success. After two years of wonderful experiences but less than spectacular sales we closed our beloved shop and I must admit I did not take it well. My body literally freaked out with massive allergic reactions and some depression. I actually had to move out of our house for two weeks while Leigh and our trusty neighbour Bob removed every bit of the carpet with the hopes of expelling whatever it was that caused my eyes to swell up like giant eggs all red-veined and festering. That's when my amazing wife had me focus on this crazy idea that had since become a plan. As our household financial manager, she crunched the numbers so we could manage on 3/4 of her teachers’ salary plus whatever I brought in for the next four years which would give us a constant and reliable source of income while we were away. Brilliant. We made a date of departure: June 27 2014, 16:00 hours to be exact, the official end of the school year and not a minute later. 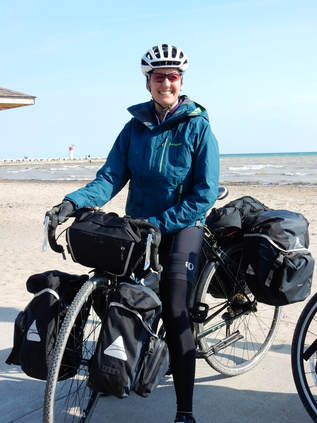 My itchy, swollen eyeballs eventually healed and I managed to get a job with a local bike shop. Surrounded by bikes and talking about cycling all day, I thought of little else other than how this one year of travelling was going to unfold. Mike, my boss, an experienced cyclotourist himself was super-supportive of our plan and a wealth of information. I met customers who had cyclotoured in different parts of the world and was a sponge with any tidbit of information shared my way. Conversation hit every aspect of cyclotouring from what to bring and how to bring it to where to go and how to get there, every option considered, no stone unturned.  I would come home and share my latest discoveries and ideas with Leigh but my enthusiasm was at times overbearing and I started to drive her a little crazy. I had to tone it down which became increasingly difficult as D-day (departure) approached. For Leigh the waiting turned to planning around the end of June 2013. "We're leaving in less than a year. We have to get ready!" Suddenly our house was a-buzz with preparations. We poured over website after blog after article about 'how to' everything. I was actually surprised at the volume of information available about cyclotouring and the range of opinions on things like how many pairs of underwear to bring and what is considered a 'luxury item'.  ​ 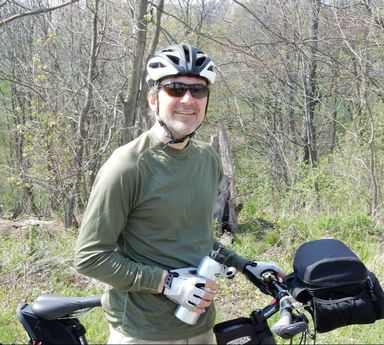 One particular step of the preparations helped define our choice of destinations: immunizations. A visit to the local travel clinic was necessary to ensure we had protection from such party-poopers as Hepatitis A and B, and Malaria. Leigh and I were both very excited to explore different countries and cultures but we agreed there was no reason to risk our safety traveling through risky areas. We could quite easily spend the entire time exploring France. So when the doctor asked if we were considering an extended visit to the less populated places of south east Asia we hummed and hawed. Maybe we might spend a couple of weeks checking it out. It would be good to have the option down the road. We were informed that immunization for this 'just in case' option would cost us $500 each. Japanese Encephalitis will make you go crazy, literally. Chancing it was not a realistic alternative. The doctor was gracious enough to leave us for a few minutes to discuss whether we were going to drop the extra $1000. or not. I had previously met a cyclist who toured Vietnam and highly recommended it. "More safe to ride there than it is here" were his words. So it’s either a full tour of South-East Asia or passing up the entire area all together.
What the hell, we're all in.

Neither of us are new to cycling. Leigh raced professionally for twelve years. Her last event as a pro-racer was the women's road race at the 2008 Olympics in Beijing. Now she rides road, cross and mountain bike but just for fun. I have almost always had a bicycle. One of my favorite bikes took me from Edmonton to Calgary - 300 kilometres in 25 hours over two days. I almost died several times on that trip but lessons were learnt and now I know that one small bottle of water wont carry me through twelve hours of scorching heat radiating off the asphalt in a constant headwind that kept on asking "What were you thinking?". Lesson #1: check the weather. Eat more than a bowl of cereal for a 12-hour ride. Sunscreen is your friend. I've made many 'notes to self' over the years but I might need a new notepad as we head out for what will surely be a year full of 'Wups, didn't see that coming, moments. 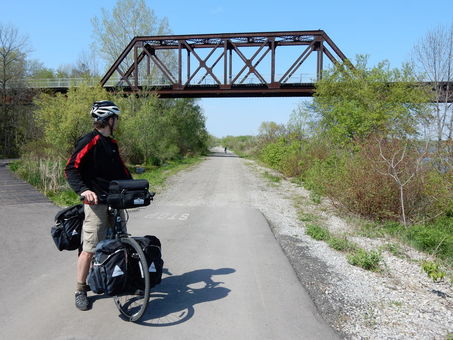 So we are going to Asia and we are not going to Africa (more immunizations, political stress, many ‘questionable’ areas) but where do we start? Too many choices make for a difficult decision. Riding straight out of our driveway into New York and crossing the Atlantic from there was plan A. Then my father-in-law, a former bike racer himself mentioned he was heading to England the following July to watch stage two of Le Tour de France pass through his old stomping grounds in Holmfirth near Huddersfield. What a great way to begin our big adventure! So with that we have the first destination of our journey. The rest of the itinerary unfolds naturally as we are to follow the warm weather heading south as fall and winter approach. Starting off this big adventure in the UK makes sense. Familiar lay of the land (we'd both been there before), familiar food, good climate (it probably will rain but wont snow in July), no language barrier, and plenty of family to stay with. Great, now let's get the best plane fare we can. Turns out Iceland Air is the most economical airline and they offer a lay-over in Iceland for up to seven days at no extra cost. Well, we're in no rush and we may not have this chance again anytime soon so now we are starting our trip off in a foreign country with an unpredictable climate, very different language and many more unknowns. It's going to epic from day one. Tourist visas also have a say in how long we stay in any one place. Most of western Europe including Iceland is now grouped into the Schengen Area which has abandoned internal border controls and requires one visa for the whole area. Unfortunately, the permitted length of stay is three months for the entire area instead of per country so we are definitely leaving Europe no later than September 27th. ​ 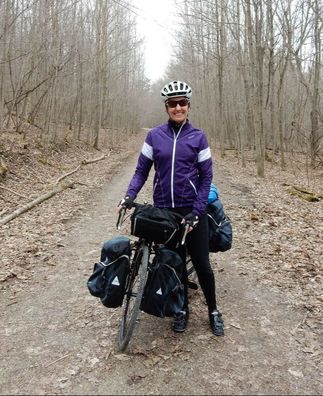 Setting up the bikes to handle day after day of riding various types and conditions and terrain involved a lot of research. There will be mishaps along the way. These mishaps will not happen right in front of a bike shop. At the very least we will both need a new chain at some point and that is something we will not be packing as spare parts. Acquiring replacement bits and pieces in Europe should not be an issue but what might be available in SE Asia is questionable. After much discussion and contemplation, we were fairly certain we had all the appropriate necessities and were prepared for travelling in almost any situation. Much of our travelling gear came from Mountain Equipment Coop, (hereafter affectionately referred to as the candy store). I carried the restaurant (stove and food), Leigh packed the hotel (tent and accessories) and we ended up with about fifty pounds of gear each spread out over four panniers and a handlebar bag. All tolled I was 250 pounds of bike, bags and body, Leigh was 225 pounds so we wont be breaking any land speed records.

There were a few more items to address before leaving for a year. Our house would fare better if someone was there to keep it lived in. Coincidentally a fellow cyclist friend needed a place to stay for a year or so. Karma was involved there I am sure. We enlisted the help of our neighbours to take care of the property and finally needed to find a year-long vacation spot for Tiggy, our cat. Again, good friends came to the rescue taking Mr. T into their home with their two cats. That could not have worked out better. The days started sailing by and all of a sudden it was June 27, time to go. Bikes in boxes, panniers saran-wrapped together, passports and tickets in hand and some good luck-good byes meant our BIG adventure was officially on.